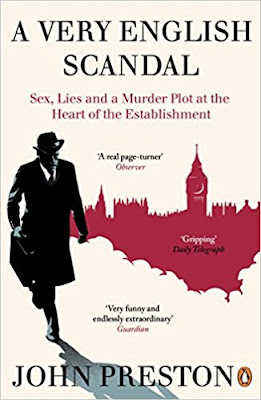 I'm guessing that everyone who visits here is old enough to remember that 'Bunnies can and will go to France.' I've had my head buried in this brilliant - and hilarious - book about the Jeremy Thorpe scandal for the past two days. In bed until the crack of dawn - on the train - during the interval at a concert last night, when I felt like shouting, 'Hold the Elgar - there's a lady in the Circle needs to finish her chapter!' It's a real page-turner, superbly well-researched (and well-written) and as gripping as a thriller, even though you know the ending. Hired assassins, dead dogs on Exmoor ... you couldn't make it up! There's a TV adaptation coming up with Hugh Grant as Thorpe (suitably charismatic/slimy but perhaps not quite cadaverous enough) and Ben Whishaw, who I imagine will be absolutely brilliant as Norman Scott. Easily the best book I've read so far this year; it's ages since I've been so engrossed.
Mary at 23:39